Our cuts chart doesn’t actually feature hanger steak…so where is it?

Hanger is the more photogenic neighbour of brisket. Seriously, take a look at those long defined fibers in the photo below, they’re absolutely mouthwatering when cooked and sliced across the grain. Just want you want for hungry customers.

Hanger steak is also called Onglet (if you’re French). It’s the classic cut used for the steak frites of French bistros and also the cut the butcher loves to take home at the end of the day. As Anthony Bourdain writes for the New York Times:

“Onglet was for years known in America as the butcher’s tenderloin, a single-strip piece of gamy, unattractive beef situated between the kidneys. Unprotected by bone or fat it quickly became dark and unsalable to American customers for whom all steak was rosy sirloin or T-bone, so the butcher would keep that piece for himself. For the French, though, this cut was a rare pleasure — because of its exposed location, it comes in contact with the air and begins aging almost immediately after the animal is slaughtered, and so it is more flavorful.”

So to answer the original question, hanger steak is located below the diaphragm of the animal, literally hanging, hence the name.

This cut isn’t particularly tender but has great flavour- ensure you marinade it then cook quickly to medium rare on the grill. Do this and it’s happy days. 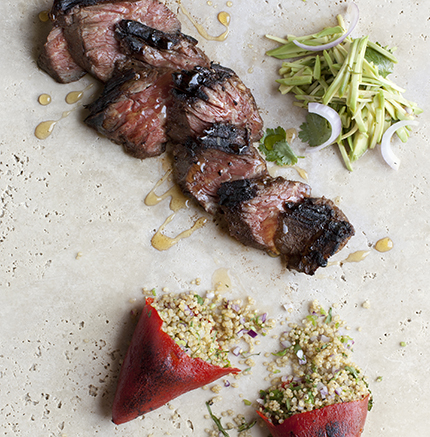